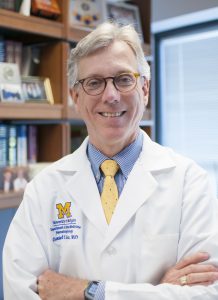 and Internal Medicine at the University of Michigan Rogel Cancer Center, Ann Arbor, MI. He is a world-renowned medical researcher and oncologist in the field of breast cancer. He has been involved in cancer research and treatment since 1982. Dr. Hayes is a specialist in translational research, an area of research that moves pure scientific discoveries from the laboratory to the clinic. He is a pioneer in tumor biomarker research and has largely contributed to the discovery and development of biomarkers currently used to guide the treatment of breast cancer patients. Dr. Hayes has played a critical role in setting up guidelines to standardize diagnostic tests to ensure that every cancer patient can be tested in a consistent manner across the US. His achievements in translational medicine have been recognized by the prestigious Gianni Bonadonna Breast Cancer Award (2007) from the American Society of Clinical Oncology (ASCO). In addition to his research, he plays leadership roles at ASCO and was elected ASCO President for a three-year term from 2015 to 2018. In this interview, Dr. Hayes takes us back to the discovery of the first biomarker for breast cancer. He tells us how combining laboratory discoveries with clinical observations and the development of guidelines can lead to reliable diagnostic tests that help treat breast cancer patients. Then he gives us an outlook on what the future of biomarker discovery holds. Disclosures: Dr. Hayes receives research funding from Menarini Silicon Biosystems and CELLSEARCH®. He is the named investigator on a patent related to circulating tumor cells and receives royalties from CELLSEARCH®.

Could you tell us about your research interests?

My research interests are focused on breast cancer, more specifically on tumor biomarkers and translational medicine. Fundamentally this means identifying, testing and validating things that help us make more precise oncology. Precision medicine and personalized medicine are on track now and you cannot do that without biomarkers.

How would you define biomarkers?

Biomarkers are things in a tumor that help doctors guide the treatment of cancer patients, either by determining prognosis (perhaps a patient does not need therapy) or by determining whether a treatment is likely to work. For example, a drug may work in some people but not in others with the same cancer. Biomarkers can help doctors find out in which people the drug will work or not.

What are some examples of biomarkers for breast cancer?

Estrogen receptor and human epidermal receptor type 2 (HER2) are two good examples. In my opinion, estrogen receptor is the first breast cancer biomarker discovered. And HER2 is a biomarker widely used to treat patients.

How estrogen receptor was identified as a biomarker is an interesting story. It takes us back to the late1890s and to Sir George Beatson who was a surgeon in Glasgow and also raised dairy goats. He had learnt from farmers that dairy animals keep lactating when ovaries are removed. Sir George Beatson also took care of patients with breast cancer and he hypothesized that there must be some connection between the ovary and the breast. He thought that was neurologic because people did not know about hormones at this time. He took the ovaries out of three young women who had breast cancer. He was extraordinary lucky. A) The three women were menstruating. Had he done it in older women it would not have worked. B) At least two of these women had what we know now as estrogen receptor-positive breast cancer, because two of them responded but the third one did not. He monitored what happened to their breasts. He described first of all what we call now, locally advanced breast cancer, and second of all what we call, response. He did not have the semantics in those days. Ovaries removal became the therapy of choice for breast cancer. By the early 1970s, the observation was that ovary surgery was not working in everybody to stop breast cancer. In 1975, Elwood Jensen identified and cloned something called the estrogen receptor, out of a rabbit uterus, not out of a human breast. Then the late Bill McGuire, and also Marc Lippman, suggested using estrogen receptor as a marker to be more precise in the way we treated breast cancer. McGuire demonstrated that patients who had breast cancer negative for estrogen receptor did not respond to the treatment, while patients positive for estrogen receptor had a pretty good chance of experiencing a response. In other words, estrogen receptor is like a mark, a label. Breast cancers with that mark may well respond to treatment, those without do not respond. Doctors can find out which patients will respond to treatment by looking for this mark on the tumor.

How have things changed since you started working in this field? Were there any particular marking moments?

There are two aspects, the technical changes and the standardization of the tests used to detect the biomarkers. The molecular biology revolution started in the 1970s and 80s with the understanding of DNA, RNA, proteins, how to isolate them and how to analyze them. Then 20 years ago, we started to learn how to do high throughput proteomics, genomics, etc. We generated enormous sets of information to develop markers that could be quite helpful to treat cancer patients and breast cancer patients specifically. Over the years we have learnt how to take a molecular biology discovery, make it better with clinical observations and develop guidelines to have standardized tests to help treat breast cancer patients.

If we go back to the original assays for estrogen receptor, estimation of the amount of estrogen receptor in tumor tissue was performed by radioligand-binding tests. These tests are very difficult to do and the results were not as precise as people would have liked. The development of antibody work – monoclonal antibody for which César Milstein won the Nobel price in 1975 – allowed people to do another type of test called immunohistochemistry. Antibody-based tests are now the standard of care.

Nevertheless, for many years, the way biomarker detection tests were done was widely disparate. The American Society of Clinical Oncology (ASCO) and the College of American Pathologists (CAP) were developing guidelines on how to standardize biomarker detection tests without talking to each other. One of the things I am the most proud of is to have helped put together a joint committee between these two organizations to develop guidelines on how to do the test for the detection of HER2 in breast tumors initially, then for estrogen receptor, about 15 years ago. Now the way the tests are done is standardized, and we have updated those guidelines 2-3 times already. A patient who comes to be treated in Northern Michigan can have the same kind of results as the patient who comes to Ann Arbor because the tests are standardized. That is a fundamental change in the 35 years I have been in the field.

The same story could be told for HER2 although the timeline is shorter.

What about BRCA1/2 breast cancer patients?

We can exploit abnormalities in the BRCA1/2 genes in terms of treatments. And now it has been pretty well demonstrated that PARP inhibitors work quite nicely in patients with BRCA1/2 mutations, at least in terms of metastatic disease – the adjuvant trials are ongoing. People are working hard to make sure that the tests for the detection of BRCA1/2 are standardized. It is a sequencing test, which is harder to mess up than antibody-based tests. We want to be right about what we tell the patient and we do not want to overtreat or undertreat people. The observation that BRCA1/2 patients respond to PARP inhibitors is leading to better outcomes for breast cancer patients. Again, we have learnt about BRCA molecular biology and the associated clinical outcomes, developed a drug for BRCA-related cancers and a test for the detection of BRCA mutations.

In recent years, we have heard about using liquid biopsies for cancer detection and monitoring. You have done a lot of work in the field of liquid biopsies. Can you tell us more about it?

I started working on circulating biomarkers – biomarkers found in blood – when I was a fellow at the Dana Farber Cancer Institute in the early 1980’s. I was assigned to a laboratory sort of against my will that was doing molecular pharmacology, which I did not like. However, my laboratory chief, Dr. Donald Kufe, put me on a collaborative project on breast cancer with a friend of his, Dr. Jeffrey Schlom, from the National Cancer Institute, and told me “I want you to find circulating markers in breast cancer”. “How do I do that?” I said. Ultimately we discovered circulating MUC1 and developed the CA15-3 assay for it, and it is now used around the world to monitor metastatic breast cancer.

The term “liquid biopsy” was first coined in 2009-2010 by Klaus Plantel from Hamburg to refer to any circulating marker that could be used to help care for patients with cancer, including proteins, nucleic acids, and circulating tumor cells. He is a giant in the field. Anything that comes out of a blood draw or urine is a liquid biopsy. Can we use this for screening healthy people? The closest is the prostate specific antigen (PSA), but it is not perfect.

More recently, the term liquid biopsy has been appropriated mostly to refer to circulating cell-free tumor DNA (ctDNA). There was a study published a month ago that looked at using liquid biopsies for cancer screening. It is a hybrid assay that measures circulating tumor DNA and tumor associated proteins in the blood. They asked all the tough questions and it is a very nice proof-of-principle study, but did not establish the use of ctDNA as a routine strategy for cancer screening. As for now, we do not have a liquid biopsy that tells a woman what to do in terms of treatment. More work is needed.

Where do you see the field going in the future in terms of biomarkers? What are you looking forward to?

Biomarkers from liquid and tissue biopsies should become complementary! Everybody wants one or the other, but the two categories should be complementary. With tissue biopsies, you get information on a lot of cells, in one organ. It is very good statistically but inform only on one place. You do not get information on other organs and it is in practice not feasible to do several organ biopsies or to do them serially. Liquid biopsies should give you information on the entire body and they can be more easily repeated in time in serial blood draws. In the long run, we need to find out which of these will give you a global picture of what is going on in the cancer.

We are trying to design new ways of getting more cells out of the blood for liquid biopsies. We have been working on a wearable device to capture circulating cancer cells to serve as biomarkers to monitor disease status. This is an exciting advance!