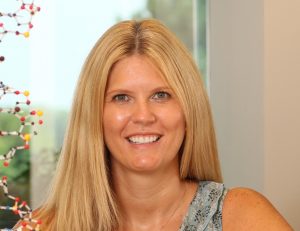 ther Hampel is the Associate Director of the Division of Human Genetics at the Ohio State University. She is a cancer genetic counselor, and an expert on Lynch syndrome. Heather Hampel has published over 250 articles in renowned medical journals. She served as President of the American Board of Genetic Counseling in 2009 and 2010, and as the President of the Collaborative Group of the Americas on Inherited Colorectal Cancer in 2017-2018. Here, Professor Hampel explains the importance of genetic testing and early diagnosis of Lynch syndrome to prevent cancers in families. She also discusses universal tumor screening for Lynch syndrome, the use of aspirin and the development of a vaccine for the prevention of Lynch syndrome-associated colorectal cancer.

How has the field of cancer genetics evolved since you started?

I have been working in cancer genetics since 1995. I started at the Memorial Sloane Kettering Cancer Center 6 months after the BRCA1 gene was discovered and 6 months before the BRCA2 gene was found. It was an exciting time to join the field and see all these discoveries happen. The differences between what we could offer patients back in 1995 and what we can offer them in 2020 are tremendous. Genetic testing, in particular for Lynch syndrome and BRCA1/2 cancers, was not commercially available to the public until November 1996. Back then it would take 6 months to get the results, some patients would be deceased by this time, and it would cost thousands of dollars. It has been really great to see the field of genetic counseling grow and improve over the last 20 years.

What is Lynch syndrome?

Lynch syndrome is the most common inherited form of both colorectal and endometrial/uterine cancer. It is almost as common as hereditary breast and ovarian cancer syndrome due to mutations in the BRCA1/2 genes, but it is very under-recognized. Lynch syndrome is caused by inherited mutations in one of the genes involved in DNA repair in our body. Individuals with Lynch syndrome are at higher risks of getting, not only colon and endometrial cancers, but also stomach, ovarian, pancreatic, urinary tract, biliary and specific cancers from sweat glands in the skin and rarely brain tumors. In addition, cancers can occur multiple times.

I like to tell my patients that the Lynch syndrome genes are sort of the spellcheckers in our body. Just like when you are writing a text or an email your spellchecker corrects your spelling without you thinking about it, the Lynch syndrome genes do that for our DNA. As the cells are dividing and replicating their DNA to make new cells, they also make spelling errors. These errors are important because they are in our genes. The Lynch syndrome genes encode proteins that can recognize those mistakes and fix them. Lynch syndrome genes are very important genes; we all have them and we want them to be working. Individuals who inherit Lynch syndrome are born with one of the spellchecker genes not working in every cell of the body. This puts them one step closer to getting a cancer. Luckily, their other copy [everyone gets two copies of each genes, one from each parent] will work and will compensate for many years. But the odds are high that one day the working copy will stop working in one of the at-risk organs, such as the colon or uterus. When that happens, people are not going to get cancer instantly. They are going to accumulate genetic mistakes that occur naturally over time but now they will be unable to fix those mistakes. When cells accumulate enough of these mistakes, they start to grow too fast, do not die when they should and they become a cancer.

Genetic testing lets people know whether or not they were born with a mutation in one of the Lynch syndrome (spellchecker) genes. The limitations of genetic testing are that we do not know when the second copy is going to stop working and what kind of cancer individuals with Lynch syndrome will get. We know which people are at risk and we can at least increase surveillance and prevention. We also do not know how many times a cancer is going to happen. We had an 83 years old patient who had an endometrial cancer and colorectal cancer five times since her 30s. She was not diagnosed with Lynch syndrome until after her fifth tumor, when she was in her 80s. The sad part of that story is that perhaps we could have prevented some of her many cancers if she was diagnosed sooner. Furthermore, between her first cancer and her last, her son developed colon cancer in his 40s and died. Such deaths could really be preventable if Lynch syndrome could be recognized and cancer patients were referred earlier to genetic testing. A lot of Lynch syndrome cancers are amenable to screening and prevention, which makes the diagnosis very important. However, people with Lynch syndrome do not always get cancer. That is very exciting too and probably an area we should study a little more. These individuals may have protective genes that keep them from getting cancers. Overall we have come very far and we are able to tell people whether or not they have inherited the spellchecker gene mutations.

What is the biggest challenge in preventing Lynch syndrome?

Lynch syndrome is very common. One out of 279 individuals has Lynch syndrome. There are pretty good estimates that 90% of people with Lynch syndrome are not aware of their diagnosis. It is completely under-diagnosed. I think that physicians and the public are starting to be aware that breast and ovarian cancers can run together in the family. However many people are not aware that colon and uterine cancer can run together in the family. People do not make the connection when someone’s sister has uterine cancer and their dad has colon cancer. The two cancers seem unrelated. People are embarrassed to talk about their colon and their rectum. All those things have led to Lynch syndrome being under-diagnosed, which is a real shame when preventive options are extremely effective. These are lost opportunities to prevent deaths. We need to educate the general population, cancer patients and healthcare providers how accessible and affordable genetic testing is so that everyone can benefit from it.

Could you tell us more about the concept of universal tumor screening for Lynch syndrome?

We believe that 3-4% of all colorectal and endometrial cancer patients have Lynch syndrome. It is about 1 in 25 patients. Given that Lynch syndrome is an autosomal dominant cancer predisposition syndrome, this is high. That means that not only the patients but also their close and extended relatives, i.e., children, parents, sisters/brothers, aunts/uncles, cousins, are at risk of having Lynch syndrome. Relatives may not have cancer yet. Making the diagnosis is an opportunity to keep them from getting cancer in the first place.

I have been working for the last 20 years to promote universal tumor screening program for Lynch syndrome on all colorectal and uterine cancers. This program is about screening all patients diagnosed with colorectal or uterine cancer to see if they are more or less likely to have Lynch syndrome and following this up with genetic testing in the high risk individuals and their family members. It took us many years to show that it was feasible, cost effective and could save lives. Universal tumor screening is now recommended by the National Comprehensive Cancer Network – a body that makes recommendations for cancer patients screening, treatment and identification of hereditary cancer syndromes. However, universal tumor screening is not implemented everywhere because the healthcare system in the US is very fragmented and each hospital decides on implementing it or not. This system contrasts with the UK and their nationalized medicine system. In February 2019, a law was signed that every colorectal cancer patient in the UK will be screened for Lynch syndrome at the time of diagnosis. The whole system can be changed with one decision whereas in the US it takes a lot of discussions. As a result, there are some estimates that in the U.S., as few as 23% individuals with colorectal and endometrial cancers are getting screened at the time of diagnosis. It is a missed opportunity because these screening tests could identify patients with Lynch syndrome and they could benefit from surveillance.

Knowing if a colorectal cancer patient has Lynch syndrome is important to make surgical decisions. Typically, when someone has colon cancer only the part of the colon with cancer is removed. The goal is to remove as little colon as possible. Because people with Lynch syndrome have such a high chance of getting a second colon cancer in their lifetime, the recommendation is to remove the majority of the colon. It is a tough decision. I work in this area and screen individuals for Lynch syndrome on their biopsy specimen when they are originally diagnosed with colon cancer. I try to provide genetic counseling and testing before they make a decision about their upcoming surgery.

What are the preventive therapies available for Lynch syndrome?

Aspirin is the only chemoprevention available. A study in Europe suggests that Lynch syndrome patients taking 600 mg aspirin daily for at least 2 years can see a benefit. A statistically significant decrease of 65% in the number of colorectal cancers has been demonstrated. This is tremendous. Aspirin also appeared to reduce the incidence of the other Lynch syndrome-associated cancers, like uterine cancer although that was not statistically significant. A concern is that this amount of aspirin may cause bleeding issues and ulcers. A follow up study evaluating optimal aspirin doses and duration of treatment is going on in Europe. They compare daily baby dose aspirin (81 mg) to 1 (300 mg) and 2 adult doses (600 mg). In the US, we have all Lynch syndrome patients consider aspirin. We always tell patients to ask their primary care providers before starting with an aspirin regimen because if they have other reasons for bleeding tendencies that would be a poor choice for them. Otherwise most patients can tolerate aspirin pretty well. It is pretty exciting, easy to take and inexpensive.

Our goal in identifying people with inherited syndromes is to keep them from getting cancer, and a preventive vaccine would be the ultimate achievement. Knowledge is power and not knowing you have Lynch syndrome can have bad consequences.