Expert interview with Michael B. Sporn, MD, the “Father of Chemoprevention”, on cancer prevention 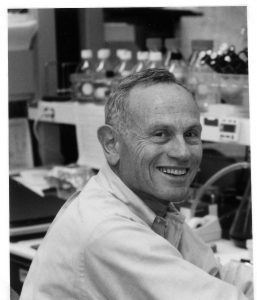 Michael B. Sporn is an Emeritus Professor of Pharmacology, Toxicology and Medicine at Dartmouth Geisel School of Medicine. Before that, he was Chief of the Laboratory of Chemoprevention at the National Cancer Institute for 17 years. Dr. Sporn created the term “Chemoprevention” in 1976. He has devoted a large part of his career to the discovery of drugs for cancer prevention, including BRCA1-induced breast cancer prevention. One of his compounds was licensed to REATA Pharmaceuticals and is now in Phase 3 clinical trial for the prevention and treatment of advanced diabetic kidney disease. In 2018, Dr. Sporn founded his own company Triterpenoid Therapeutics, Inc. to develop and commercialize new compounds for cancer treatment and prevention. In addition to his research activities, he is a fervent advocate of cancer prevention and has written numerous articles to alert people on the importance and challenges of adopting a cancer prevention approach. Dr. Sporn’s accomplishments have been recognized by prestigious awards, including the 2002 American Association for Cancer Research (AACR)-Cancer Research Foundation of America Award for Excellence in Cancer Prevention Research. He is an Elected Fellow of the American Association for the Advancement of Science and AACR Academy and was a member of the President of the United States’ Cancer Advisory Board in 2007. Here, Dr. Sporn shares his views on the importance of cancer prevention in keeping people healthy. He explains why a change of mindset is necessary to overcome current obstacles to a cancer prevention approach and proposes some solutions.

Why is cancer prevention important?

I think that the need for prevention is intuitively obvious. Many lay people ask me, “We prevent heart disease, infectious diseases, why not cancer?”. The “War On Cancer” was launched 50 years ago and there have been spectacular advances in the treatment of various types of cancers. Still the total cancer incidence worldwide is rising and new forms of cancers are emerging. Pancreatic cancer for example was relatively rare 50 years ago, yet it is going to be the third leading cause of cancer death in 2030. Also lung cancers in women who do not smoke are on the rise. All these situations are opportunity for cancer prevention. We started working on cancer prevention more than 40 years ago with the notion that one could develop drugs to prevent cancer and also the notion that cancer is not a disease that starts all of a sudden: you are not cancer-free one day and the next day you get cancer. Cancer is a chronic disease. There is a very a long latency period in which people are not symptomatic. Still, there are changes going on and this is called premalignancy. Cells are becoming more and more dysfunctional, and that results in a lesion. Cancer heterogeneity increases with metastasis. How to fix the whole problem? The best way to fix it is at the beginning before it becomes so complicated. There is a period of many years in which one could intervene to stop the progression. We showed by giving various drugs to experimental animals we could prevent lung cancer, breast cancer, colon cancer, prostate cancer, even pancreatic, and all common forms of epithelial cancers. One big argument for cancer prevention is that it would save a lot of money. New immunotherapies cost half a million of dollars per person. We have to find some simple way, a pill, or a combination of pills that would keep people healthy. This is the way we have dealt with AIDS, people take several drugs. I think that for cancer prevention we will also end up ultimately with a combination of cheap pills. That is a dream from long ago. Meanwhile, young women who have a BRCA mutation are faced with the decision of removing breasts. But what should they do? All that we are offering right now is bilateral prophylactic mastectomy or watchful waiting. There should be a crash program for developing a practical drug regimen for preventing BRCA-induced breast cancers. We know it can be prevented in experimental animals but it has never been developed in a practical way for women. PARP inhibitors for example can prevent BRCA1 in experimental animals. There are drug regimens that could be developed in a safe way for BRCA-induced breast cancers.

Why has a cancer prevention approach not been adopted yet?

There is a great resistance to chemoprevention on the part of many, many people in the oncology community, medical schools, hospitals, big pharma and insurance industry to adopt this approach because most people in medical practice are thinking of curing end-stage diseases. Keeping people healthy is not reimbursable. We should have a medical system in which doctors are paid to keep people well and out of the hospital. You would get a bonus if your patients stay healthy. Instead we have fee-for-service medicine and financial incentive for treating people who are already sick. There is a total mindset about it. The insurance industry largely drives what is going on in medical practice. These are very complicated issues. In 1999, a working group of experts, i.e., epidemiologists, clinicians, pharmacologists, basic scientists, convened through the American Association for Cancer Research to talk about these issues and wrote a report about all this [1]. A very big impediment to cancer prevention is this question of side effects of any preventive drug. There is no drug which is totally safe. Commonly used drugs such as aspirin have side effects. Some people die of gastrointestinal bleeding and we still use aspirin. There is this misperception that people are healthy until they have invasive cancers. People with premalignant lesions are not healthy. In the case of heart disease, we convinced people that conditions prior to a heart attack are part of the disease process. If you have high cholesterol, high blood pressure, then you are at risk of heart diseases and you can take preventive drugs, such as statins that cut cardiovascular deaths. We have not got into that mindset for cancer. That is an entire educational aspect. Pharmaceutical companies are worried they could be sued if there is an issue with a patient on a preventive drug. If 1000 people take a preventive drug, and it works for 999 but 1 person out of 1000 is in trouble with an undesirable side effect, that can end up in a multi-billion dollar lawsuit. The way to deal with it, and we have written about this, is to get an insurance scheme. That is what we do with automobile. We lose 50,000 people/year with automobile accidents but we do not get rid of automobiles. Most people drive safely. We have insurance schemes, and people who are in the accident get reimbursed. The mindset is not oriented towards prevention. We are seeing unfortunately with the COVID pandemic exactly what happens when we do not provide prevention. We were warned by SARS there were risks of pandemic 10 years ago. But SARS went away and nothing was done to prepare for a pandemic because it costs money. And now we are paying for loss of over 100,000 lives with COVID and a cost to society of trillions of dollars. This could have been avoided if we had set up an anti-COVID prevention scheme. The same is true with cancer on a lesser scale. Cancer causes a huge numbers of deaths and many of them are preventable if we adopt an ethic of prevention. But we wait for people to be severely ill and we treat them often when it is too late.

How has the field of cancer prevention changed over the years

If I look over my career, there is less and less interest in doing cancer prevention research. Most of the people involved are emphasizing genetics and think that fixing one, or just a few genes will solve the problem. There is more and more evidence that epigenetics plays a role in cancer. There is not any one single thing that is going to be a magical cure, a magical prevention for cancer. A total approach to keep people healthy is needed. Eating better, exercising, a better lifestyle, and if your genetic burden is high enough, you are going to need a pill, or a combination of pills as well.

What could be done in the future to move cancer prevention forward?

Could you tell us more about your research programs?

We are very interested in natural compounds derivatives. Oleanolic acid is a natural compound derived from olive. It has weak anti-cancer, anti-inflammatory and anti-viral activities. It can be modified chemically to increase its activity thousands of times and make it into a more practical drug. That is what we have done in our research program. We have made over 500 derivatives of oleanolic acid and its relatives, ursolic and betulinic acids. These compounds can prevent lung cancer in experimental animal models as well as many other cancers. So these compounds could be developed into chemoprevention compounds for humans, but it is not very easy to do. Two years ago, I started my own company to develop our best new drugs for many applications, especially cancer. Our first clinical targets will be treatment of multiple myeloma and glioblastoma multiforme, if these studies are successful, then we would like to pursue clinical chemoprevention studies.

How did you get interested into discovering drugs for cancer prevention?

Making new molecules is what I like doing and what keeps me going. I am Emeritus now but I am busier than I have ever been. I still do a lot of new drug development under contract and with some collaborators.

We do not have the perfect drug or combination of drugs to prevent cancer. I have been spending my professional life to make better drugs. A long time ago, almost nobody would survive a heart surgery. Surgeons then developed better techniques and now hardly anyone dies from heart surgery. Similarly for cancer prevention, we need better technologies, and drugs are part of that, and then getting carcinogens out of the environment, stopping obesity, which is a principal cause of cancer and diabetes. It is a total push across the board. Better drugs, better lifestyle, and commitment to keep people healthy!

[1] Prevention of Cancer in the Next Millennium. Report of the Chemoprevention Working Group to the American Association for Cancer Research. CANCER RESEARCH (1999) 59, 4743 – 4758