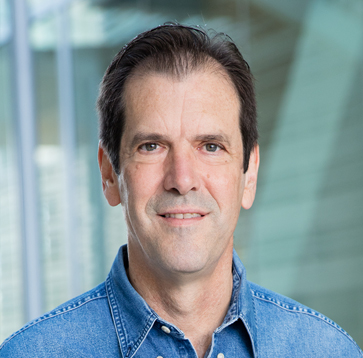 Dr. Ray Deshaies is Senior Vice President of Global Research at Amgen and a Visiting Associate at the California Institute of Technology (Caltech).

Prior to joining Amgen, Dr. Deshaies received his BS in biochemistry from Cornell University, and his PhD in biochemistry from the University of California, Berkeley. He performed his postdoctoral research at UC Berkeley and the University of California, San Francisco. This training led him to start his own research group at Caltech studying how cells dispose of proteins to maintain homeostasis and how disrupted regulation of this process leads to disease, including cancer. Building on this academic work, Dr. Deshaies co-founded several biotech companies to commercialize technologies with therapeutic potential.

Dr. Deshaies received numerous awards for his outstanding research contributions. He has been elected as a Fellow of the American Association for the Advancement of Science (AAAS), as a Member of the American Academy of Arts and Sciences (AAA&S), and as a Member of the National Academy of Sciences (NAS). He was also selected as a Howard Hughes Medical Institute (HHMI) investigator.

In this interview, Dr. Deshaies explains the path to his current role at Amgen. He gives us the unique perspective of someone who has experience in both academia and industry. He also describes many of the opportunities and challenges in drug discovery and cancer prevention and the necessity of both academic and industrial efforts in bringing innovative new medicines to patients.

This article reports Dr. Deshaies’s personal views as an individual and cannot be attributed to Amgen.

Could you tell us what inspired you to go into biomedical sciences?

My interest in biology started with an interest in plants. I grew up in inner city Connecticut and we had this tiny little yard next to our house where my dad would grow tomatoes. I started helping him, and then I started growing plants myself. It was a hobby, but something I became quite interested in. On a family friend’s suggestion, I applied and got into Cornell because they had a good agriculture school. My prospective major was horticulture, but I also had to take classes in the basic sciences – chemistry, basic biology, and physics. I became interested in understanding biology at a molecular level. Subsequently, I changed my major to Biochemistry and focused my undergraduate and graduate studies in this area.

After a long tenure at Caltech you left academia to work in industry. You’ve had a very successful academic research career and had been recognized for your contributions. Can you tell us what influenced your decision to transition to industry?

Part of the motivation was that after 23 years at Caltech, I was ready to do something different. I had achieved many goals that I had set out at the beginning of my career. I had run my own lab, made scientific discoveries, published high impact papers, and mentored many graduate students and postdoctoral fellows. The prospect of learning new things in a different environment appealed to me.

While in academia, I had been involved with biotech start-ups and had some first-hand experience of the process of drug development in industry from an outsider’s perspective. I realized that by working in industry, I would gain an additional perspective of the drug development process. Translational research was gaining ascendency and industry seemed, for me, the right place to be.

Having experience in both academia and industry, what would you say are the similarities and differences between these two environments?

Generally, a major difference I see between academia and industry is that of perspective. In academia, the motivation is to understand nature and a very small portion of the work is translational, while in industry you are primarily oriented towards developing drugs for patients. While academia is about basic science discovery, industry also includes application of discoveries.

As someone who has made basic science discoveries that led to successful drugs, can you discuss the importance of basic science research for drug development? In your experience, how does basic research inform and shape the development of cancer therapeutics at drug companies?

One great example of basic science leading to therapeutics is of the development of proteasome inhibitors that are now used in a variety of cancers, most notably multiple myeloma, a type of blood cancer. The proteasome is a protein complex that destroys damaged or unwanted proteins from the cell. Fred Goldberg at Harvard University was exploring ways to control protein degradation because he had an interest in muscle wasting that happens (for example, in late-stage cancer patients) due to excess protein degradation by the proteasome. Alongside efforts in his academic lab, he founded the small biotech company, MyoGenics, to develop compounds that inhibit the proteasome. They developed a molecule that is used to treat multiple myeloma. Notably, these researchers did not set out to study the proteasome with the intention of developing a drug for multiple myeloma. The sensitivity of multiple myeloma cells to proteasome inhibitors was a fortuitous discovery. But we would never have proteasome inhibitor drugs if not for the fundamental research driven by the curiosity to learn how cells degrade proteins.

A second example is the development of PROTACS (Proteolysis Targeting Chimeras). While at Caltech, I collaborated with Craig Crews, a chemical biologist from Yale with a shared interest in protein degradation. We conceived the idea of utilizing the proteasome to remove harmful or unwanted proteins. We designed these new molecules – PROTACs that can be used to target specific proteins for degradation. Craig started a biotech company and has developed drug candidates that are now in clinical trials for treating breast and prostate cancer.

The technology to develop PROTACS incorporated an understanding of the basic biology of regulating protein destruction and an extensive knowledge of chemistry to design compounds that can be used as therapeutics. More than twenty years since its inception in an academic lab, PROTAC technology is now being applied by many drug discovery labs and is currently a major interest to major pharmaceutical companies for its applicability to various diseases, not just cancer. It has also spun off novel technologies to destroy proteins through other mechanisms rather than the proteasome and to target other types of molecules in the cell, such as RNA.

What are the major challenges in drug discovery space? Lack of a detailed and comprehensive understanding of the disease could be an obstacle; is the challenge in the basic biology? Or is it targeting efficacy?

I don’t think one challenge dominates over the other, but targeting is a major challenge. A vast majority of known disease-causing proteins are yet to be targeted pharmacologically. This continues to be a major problem in inhibiting the known drivers of cancer. In addition, the complexity of the biology remains a problem. One major challenge comes from the interconnection of signaling pathways that convey information from outside the cell to the inside. The different signaling pathways are not linear but are connected to each other like a web. You may target one component of a signaling pathway with a drug, but then a different component of the signaling web would step in to compensate. So, you need to understand the complexity of the whole signaling web to effectively design inhibitor approaches. You may need to use combinations of drugs to target multiple components to overcome redundancy or compensation.

What is important for our readers to know about the drug development process? Can we accelerate the process of transitioning basic discoveries into therapeutics?

Successfully transitioning a molecule from the bench to a drug for the patient is a costly and lengthy process. Usually, it takes several decades to take a discovery and develop it into a drug for a patient. Once a basic science discovery is made, industry takes the basic discovery and does the applied work of making a drug. To make a drug, thousands of compounds have to be evaluated. Making and testing these compounds is expensive, and the cost is well beyond the budget of academic labs. A range of expertise is required from multiple scientific disciplines including medicinal chemistry, pharmacology, drug metabolism, safety, pathology, etc. to ensure a therapy is safe and effective before testing in humans. Many steps in this process are still empirical and empirical is inherently slow.

Academia and industry both have critical roles to play in drug discovery. Academia is really good at asking open ended questions, figuring out mechanisms, and in-depth characterization. Industry is well set up to take fundamental observations and translate them into drugs. Academia develops the idea and demonstrates its initial feasibility, but the concept will die if not handed to the private sector, which can supply money and professional drug developers to provide additional insights and mature the initial ideas into a drug. Academia and industry are complementary, and they meet somewhere in the middle between discovery and application.

What advice would you give young researchers?

Looking back at my own career in research, one thing I always tried to do is avoid the hot research despite its appeal. With many people working on the same question, it becomes a race to make the next discovery. For me, this race took away from the fundamental joy of discovery. I’d rather work on a problem where I would be rewarded for my creativity and insight instead of speed.

As a graduate student, I had the opportunity to work on a fundamental question in protein transport, but a question only a couple of other labs were working on. I took a different approach from others and successfully identified the key component necessary for this process. This finding is now taught in every cell biology course everywhere. This early experience showed me that one does not have to work in the hottest field to make important discoveries.

Perhaps this notion can best be stated by a conversation I had once with Seymour Benzer, a senior scientist at Caltech when I started my lab. He expressed his interest in pit vipers. In particular, how pit vipers sense small temperature changes even at sizeable distances. This is how a pit viper can sense the presence of warm-blooded prey nearby. This puzzle was not on my radar and out of left field. Maybe I should have taken his advice, as years later, the Nobel prize was won by scientists who described the temperature sensory system! So, my advice is to ask a fundamental question about science that interests you and delve into it.